For more than 60 years, an important provision in the federal tax code has successfully protected charitable nonprofits, religious congregations, and foundations from being hounded by politicians, political operatives, and paid political consultants seeking political endorsements, financial contributions, and more. That provision, sometimes called the Johnson Amendment, is threatened now by bills and extraneous riders to other legislation seeking to completely repeal or substantially weaken this longstanding protection in the law. Although couched as attempts to promote religious freedom and free speech, the legislative proposals would have the effect of politicizing and thereby erasing the public’s high trust in charities, houses of worship, and foundations to benefit politicians and paid political consultants. 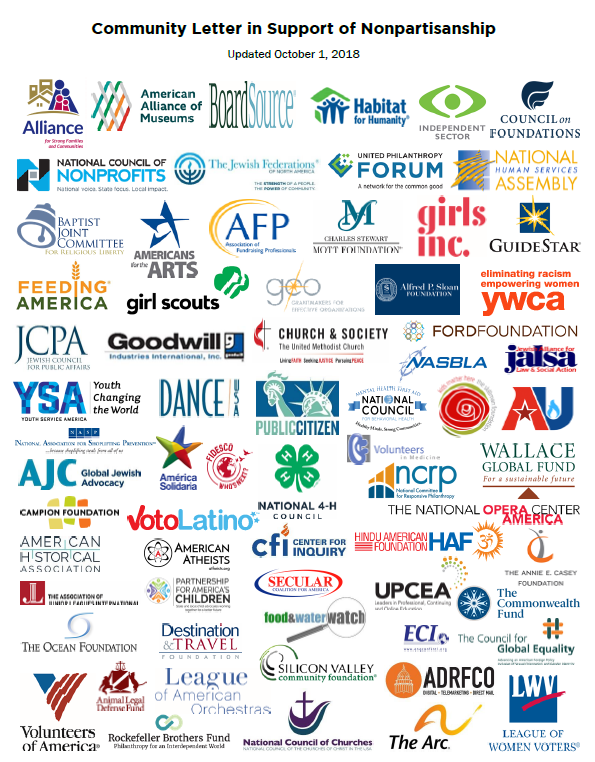 Community Letter in Support of Nonpartisanship

A broad, nationwide coalition of 501(c)(3) organizations, made up of charitable nonprofits, including religious institutions and foundations, delivered a clear message to Congress: maintain the current law that protects nonprofits organizations from being hounded for partisan political contributions and endorsements. The Community Letter in Support of Nonpartisanship, signed by more than 5,800 organizations from every state and every segment of the charitable and foundation communities, declares strong support for nonprofit nonpartisanship and urges those who have vowed to repeal or weaken this vital protection to leave existing law in place for nonprofit organizations and the people they serve.

Those seeking to politicize 501(c)(3) organizations are back, vowing to have their way and trying to attach their anti-Johnson Amendment language to legislation. All individuals who care about the integrity and effectiveness of a nonprofit’s mission need to take action to protect the Johnson Amendment and tell Congress not to change this vital and longstanding law.

Congress must resolve legislation before the end of the year, that, among other things, would significantly undermine the longstanding Johnson Amendment, the provision of federal tax law that protects charitable nonprofits, houses of worship, and foundations from demands from politicians and others for endorsements and other support. At issue is controversial language on an appropriations bill that would effectively block the IRS from enforcing the Johnson Amendment when “churches” violate it in even the most egregious ways, such as diverting charitable assets to influence partisan political campaigns. That language was added at Section 112 to the Financial Services and General Government appropriations bill for fiscal year 2019, that began on October 1, but was not included in the final language. Similar efforts to politicize the nonprofit community were thwarted on the tax bill in late 2017 and well-funded special interests vowed to push even harder to repeal or weaken the Johnson Amendment.

If enacted in the future, these provisions would politicize charitable nonprofits, houses of worship, and foundations by plunging them into the caustic partisanship that bedevils our country. Notably, the proposals would encourage creation of sham organizations, divert contributions from other nonprofits to fund partisan churches, and bring discredit to the broad charitable nonprofit community. This change to the Johnson Amendment would be contrary to the views of the vast majority of organizations that benefit from the law, as reflected in the Community Letter in Support of Nonpartisanship, signed by more than 5,800 organizations in all 50 states, in the Faith Voices letter signed by more than 4,300 faith leaders, in the separate letter signed by more than 100 denominations and major religious organizations, and the law enforcement community, as well as polls showing that 72 percent of the public support keeping the Johnson Amendment in place and nearly 90 percent of evangelical pastors who say it is wrong for preachers to endorse candidates from the pulpit.

The tax-law provision now being challenged by politicians is the final clause of Section 501(c)(3), which provides that in exchange for tax-exempt status, a charitable nonprofit, foundation, or religious organization may “not participate in, or intervene in (including the publishing or distributing of statements), any political campaign on behalf of (or in opposition to) any candidate for public office.” Since 1954, that language has served to protect charitable nonprofits and foundations – and the donating public. It helps to ensure that organizations dedicated to the public good in communities remain above the political fray.

Our society is better today, because 501(c)(3) organizations operate as safe havens from the caustic partisanship that currently is bedeviling our country, as places where people can come together to actually solve community problems rather than just posture and remain torn apart. Repeal or revision of the law would damage the integrity and effectiveness of all charitable nonprofits and foundations.

Congress first exempted from taxation organizations operating “solely for charitable, religious, or educational purposes” in 1894. Since then, Congress has added amendments expanding the list to include several other entities that can qualify for tax exemption. Congress also has added three major conditions: to receive the benefits of tax exemptions, those organizations cannot pay out profits (no private inurement), spend a substantial part of their activities lobbying, or engage in partisan politics (the provision at issue now). Organizations can do any of those, of course, but then they lose their tax exempt status.

Congress adopted the main part of the provision being challenged now in 1954 when Senate Minority Leader Johnson offered it as an amendment – which is why it is sometimes called “the Johnson Amendment.” Additional language was added to that provision in 1978 (the “or in opposition to” parenthetical): “does not participate in, or intervene in (including the publishing or distributing of statements), any political campaign on behalf of (or in opposition to) any candidate for public office.

Now, the President and some in Congress are seeking to remove the protection in federal law that keeps charitable nonprofits, including religious institutions and foundations, away from engaging in partisan, election-related activities, such as using charitable assets for political contributions and endorsing candidates for elective office. One bill in Congress, H.R. 172 , would completely repeal the “no partisan politicking” provision, subjecting nonprofits to demands/requests to get involved in partisan political electioneering, including using charitable, religious, and foundation assets to make political donations. Such a move would not only allow people to get tax deductions for making political donations, but also force the public to effectively be subsidizing that speech by others. Two other bills, S.330 and H.R.949, would substantially weaken the law by allowing leaders of individual 501(c)(3) entities to endorse candidates for public office and engage in some partisan electioneering activities.

Efforts could also be made to attach a version or repealing or weakening of the Johnson Amendment to must-pass legislation such as appropriations bills. In late June, one such effort attached an extraneous rider to the Financial Services FY2018 appropriations bill (at Section 116) that would hinder enforcement of the Johnson Amendment against religious institutions, even when there are egregious violations. The House tax reform legislation, the Tax Cuts & Jobs Act (H.R. 1) passed on November 16, 2017, and included a provision (Sec. 5201) granting a partial exemption from the Johnson Amendment to all 501(c)(3) organizations.

In August, the Justice Department submitted a brief in Freedom From Religion Foundation v. Trump, defending President Trump’s Executive Order on the Johnson Amendment while raising questions about the substance of the Order. The government admitted, “The text of the Executive Order itself does not purport to exempt religious organizations from the political campaign activity provisions of § 501(c)(3), nor does it privilege religious organizations over secular organizations. Rather, section 2 of the Order merely directs the Government not to take adverse action against religious organizations that it would not take against other organizations in the enforcement of the § 501(c)(3) restrictions.” The Justice Department’s brief appears to contradict the President’s Rose Garden signing ceremony statement: “You’re now in a position to say what you want to say.” Parties seeking to politicize charitable nonprofits, houses of worship, and foundations are likely to see the Justice Department acknowledgement as a reason to increase pressure on Congress to change the Johnson Amendment.

The House passed tax reform legislation, Tax Cuts and Jobs Act (H.R.1), on November 16, 2017, exactly two weeks after the bill was introduced and without allowing any amendments to the original bill except by the Chair of the Ways and Means Committee. The vote was 227 to 205, with thirteen Republicans joining all Democrats in opposing the bill. The legislation includes language that would significantly weaken the protection from partisan politics that has for decades enabled charitable nonprofits, houses of worship, and foundations to remain focused on their missions and problem-solving in their communities. The Senate passed its version of tax cut legislation in the early hours of December 2. Unlike the House, the Senate did not include any anti-Johnson Amendment language.

Language that would have undermined the Johnson Amendment was excluded from the final version of the tax reform bill by the Senate Parliamentarian because it would violate the Byrd Rule, a technical Senate requirement. The House-passed tax reform legislation, Tax Cuts and Jobs Act (H.R. 1), included a provision, at Section 5201, that would have created a giant loophole in the absolute ban on nonprofit politicking by enabling all 501(c)(3) organizations to endorse candidates for public office when communicating “in the ordinary course of the organization’s regular and customary activities,” such as speaking on weekly or daily broadcasts or publishing election editions of magazines, and when spending “not more than de minimis incremental expenses,” an undefined term. The nonpartisan Joint Committee on Taxation determined that the House language would have cost the U.S. Treasury more than $2 billion because donors to political campaigns would likely shift their giving to newly partisan churches and charitable organizations to secure – for the first time – a charitable tax deduction for their purely political giving.

Statements of Support for Nonprofit Nonpartisanship

Op-Eds and Letters to the Editor